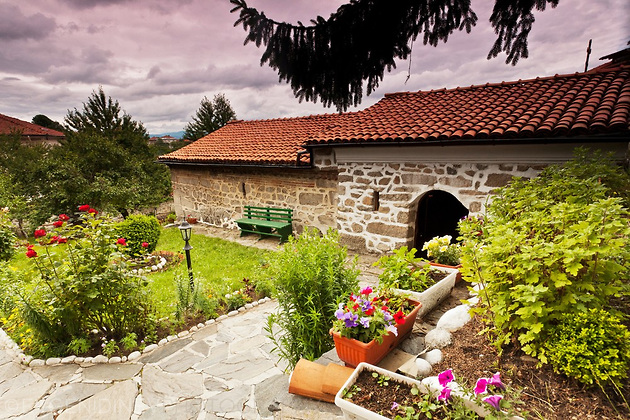 Highlight of the day: The Bistritsa Babi, part of the UNESCO cultural heritage. Bistritsa Babi are an elderly/multi-generational female vocal ensemble carrying on the traditional dances and polyphonic singing of the Shopluk region of Bulgaria. Founded in 1939,]the group won the European Folk Art Award in 1978, and it was declared a Masterpiece of the Intangible Heritage of Humanity in 2005. They are known for their use of shoppe polyphony, costuming, dancing in a ring (horo), and performing the lazarouvane (the girls' springtime initiation ritual). In 2005 they were included in UNESCO List of Intangible Cultural Heritage elements in Eastern Europe.

Arrival and transfer to the hotel. Free time. In the afternoon concert of Bistritsa Babi. Welcome dinner with traditional music and dances.

After breakfast we are heading for a daily trip to the Rila Monastery - the most famous and fascinating monastery in Bulgaria, under the UNESCO protection. The entire complex is quite impressive for its size. The 4-floor residential part consists of no less than 300 monks’ cells, 4 chapels, an abbot’s room, a kitchen, a library and guestrooms for donors. The kitchen is particularly interesting for its really huge cooking vessels. The exterior of the monastery is no less intriguing for its high and severe stone walls (reaching 4 floors and even more at some places) cut through by small windows – reminding of a military fort rather than a monastery. Once in the complex, it is worth visiting the monastery’s museum, which hosts a unique work of art, namely The Raphael’s Cross. The cross is made of a whole piece of wood (81cm x 43cm) and is named after its creator. Afternoon arrival in Bansko - the most modern ski resort in the country. Bansko has an atmosphere of its own: an exciting combination between the magnificent nature of Pirin Mountain and the ambience of an old Bulgarian small town. Dinner in a traditional local restaurant where you will enjoy the unique authentic performance of "Banski Starcheta" folklore group.

Highlight of the day: Unique authentic performance of "The Grannies of Dovarsko" folklore group and tasting of traditional Bulgarian food.

Departure for Dobarsko village. According to the legend, Dobarsko was founded by soldiers from Bulgarian tsar Samuil’s blinded army after the Battle of Belasitsa in 1014, who arrived in the area en route to the Rila Monastery and discovered a holy spring that allegedly cured them. The Church of Theodore Tyro and Theodore Stratelates, a small three-naved stone basilica half dug into the ground, was constructed no later than 1614 and is known for its abundance of original frescoes and icons, some of which are interpreted as portraying Jesus in a rocket. The holy spring in the church yard is said to be curative and indeed the one that cured Samuil’s soldiers that founded the village, as depicted in one fresco. A small swastika and a cross on the eastern wall are the only items in the exterior that show that the small stone building is a religious temple. The frescoes were cleaned up and partially restored in 1974-1978 and the church is a national monument of culture, as well as one of the 100 national tourist attractions. Upon arrival meeting the tourists with a folklore demonstration in the old church yard: singing songs and dancing horo (a round dance), presentation of traditional customs by "The Grannies of Dobar". Tasting local dishes: baniza (cheese pastry), homemade milk and cheese. In the afternoon drive for Plovdiv. Free time and overnight.

Breakfast. Tour of the Old Town of the city of Plovdiv - an imposing open-air museum, situated on the three hills of the ancient Trimontium. Visit to the Ancient Theatre (a well-preserved Roman amphitheatre), Ethnographic museum and other interesting sites. Drive to Kazanlak. Visi the Kazanlak Thracian Tomb, part of the UNESCO World Heritage.

Highlight of the day: Choir of priests is performing Orthodox singing in one of the authentic medieval churches in the village of Arbanasi.

Travel north to Veliko Tarnovo for a one-night stay. Continue to the village-museum of Arbanasi, famous for its beautifully painted Nativity Church. Private priest concert in one of the village`s churches. The day continues with a visit of the former Bulgarian capital, Veliko Tarnovo. Visit tthe fortress of Tsarevets - symbol of the reign of the Second Bulgarian Empire. The town is steeped in regality as the former home of several Bulgarian Emperors with its palaces, marketplace and patriarchal cathedral among the points of interest.

Highlight of the day: Private concert in the National Art Gallery of the Bulgarian Cosmic Voices. Welcome cocktail in the National Art Gallery with champagne and exclusive capella performance of the Bulgarian Cosmic Voices Choir. In the environment of the former royal palace and the large collection of paintings the singers will bring to life a superb magical musical atmosphere, a vibrant mix of Slavic, Byzantine, Asiatic, and Turkish sound elements.

Breakfast. Drive to Sofia. A tour of the city's main landmarks including the Alexander Nevsky Cathedral, Holy Sophia Church and the Russian Church of St. Nicholas the Miracle Maker concludes your stay. The rest of the day at leisure.

DAY 7 SOFIA, DEPARTURE TO THE COUNTRY OF ORIGIN

Breakfast. Transfer to the airport. Departure.