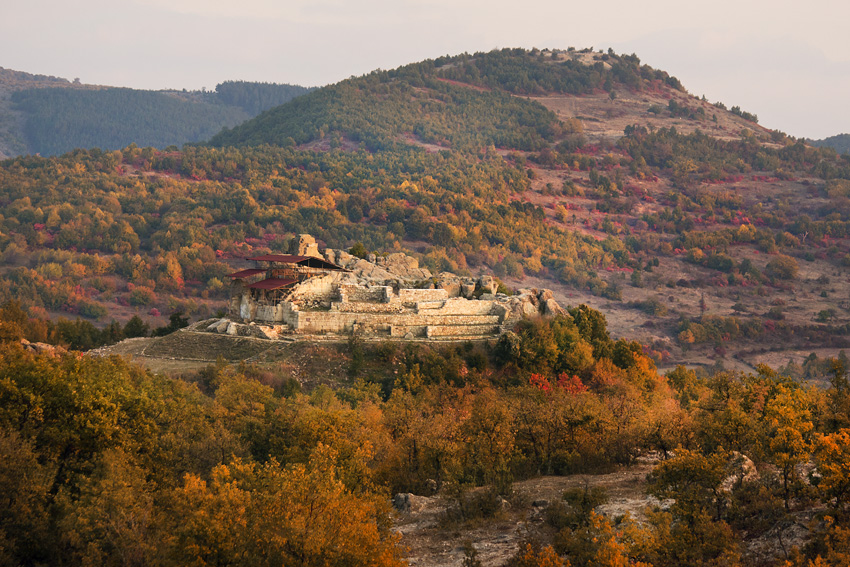 Your trip will begin in the capital city of Sofia. Upon arrival at the airport, you will be taken to your hotel to check-in for your overnight stay. A tour of the city will follow during which you will visit Sofia's main landmarks including the Alexander Nevsky Cathedral, Holy Sophia Church, The Russian Church of St. Nicholas the Miracle Maker, St. George's Rotunda, the Ivan Vazov National Theatre, the National Palace of Culture, Parliament Square and the National Archaeological Museum.

Morning departure for Plovdiv. Tour of the Old Town of the city of Plovdiv - an imposing open-air museum, situated on the three hills of the ancient Trimontium. Visit to the Ancient Theatre (a well-preserved Roman theatre) and the church Saint Constantine and Helene. In the afternoon departure for Kardzali. Accommodation and overnight.

Morning departure for Perperikon - the largest megalithic archaeological site in the Balkans perched on a rocky peak at 1,400 ft above sea level. This huge Thracian city called “the European Machu Picchu” consists of buildings, rooms, streets, squares and a water supply system, and is unlike anything that anyone had ever associated with the "barbaric" Thracians. Of particular interest is a huge altar 6 feet in diameter and hewn straight out of the rock. Here the Tracians would have practiced fire rituals such as dancing on hot coals, and would eventually (500 AD) erect a small church when they were Christianized by the Romans. In the afternoon departure for Tatul. The sanctuary lies inside the fortress walls of a Thracian fortress and is believed to have been dedicated to the famous Thracian singer, Orpheus. The sanctuary, deemed to date back to the 12th century BC, represents a big monolithic rock shaped by men into a pyramid. It is 4.5m high and 6m wide at its base. Within its body, worshippers have dug two rocky cemeteries, 8 stairs, and a niche for laying a ritual plate. Departure for Svilengrad. Arrival and overnight.

Breakfast. Morning departure for the village Matochina for visit the Byzantine citadel Bukelon, one of the best preserved examples of medieval fortresses in Bulgaria. The citadel which goes along the ridge of the hill is 65 m long. Here, the Latin Empire was crushed by Bulgarian King Kaloyan. The sovereign Baldwin has been captured and imprisoned in the citadel. Visit of the Stone Church near the village Matochina, engraved in a rocky terrace. The entrance is overarching corridor 4.4m. long and 3.5 m. high. In the afternoon departure for the village Mezek for visit of the Medieval fortress Neutzikon, one of the most unspoiled Medieval fortresses in Bulgaria, built at the end of the 11th. Visit of the Thracian tomb in the village of Mezek - which is dating back from 4th Century BC. It is made of large well smoothed stone blocks. During the excavation there were found a lot of golden, silver, bronze, iron, pottery objects. The tomb is one of the biggest tombs which were inhabited by the ancient Thracian tribes. Departure for Dolni Glavanak for visit the Cromlech, the Thracian cult -megalith monument. Return to Svilengrad for the overnight.

Drive to Nessebar - one of the oldest towns in Europe, well known for its impressing monuments from the Antiquity, fascinating architecture from the Middle Ages and the National Revival period. The town is situated on a small peninsula and on the land jutted out into the sea. Its beach is considered to be the best along the Black Sea Coast. The churches of Nessebar are 41. Not all of them have preserved their full brilliance but even their present condition strongly impresses all visitors. One of the oldest sights is the Basilica situated on the sea-shore, built most probably at the beginning of 5th century. The Old Bishop`s Residence located in the centre of the town, is probably the most imposing one of all churches in Nessebar. The Old Town is part of the UNESCO World Heritage List. Continue for the maritime capital of Bulgaria – Varna.

City tour of Varna - a place inhabited still before the Greeks established the colony of Odessos there in c. 580 B.C. Visit of the Archaeological Museum, the Sea Garden and 17th century Cathedral of the Holy Mother. Departure for Shumen. On the way visit the first capital of Bulgaria Pliska and the Madara Horseman National Preserve (UNESCO). Arrival and overnight in Shumen.

Breakfast. The tour continues to Sveshtari Thracian Tombs Complex renowned for its extraordinary decoration. Arrival in Ruse. In the afternoon departure for the Ivanovo Rock Monasteries (UNESCO ). This is where the first hermits had dug out their cells and churches during the 12th century. The 14th-century murals testify to the exceptional skills of the artists.

Breakfast. Morning departure for Veliko Tarnovo. The medieval capital of Bulgaria, Veliko Tarnovo, and the fortress of Tsarevets, is symbolic of the reign of the Second Bulgarian Empire. The town is steeped in regality as the former home of several Bulgarian Emperors with its palaces, marketplace and patriarchal cathedral among the points of interest. You will enjoy a tour of the city before making the short trip to the village of Arbanassi and later the Transfiguration Monastery.

Breakfast. Morning departure for Kazanlak. Visit to the ancient Thracian Tomb (UNESCO) there. Continue to Starosel to visit the next place of culture - the Thracian Temple from 6th-5th century B.C. Departure for Sofia. and overnight there.

Breakfast. Transfer to the airport. Departure.