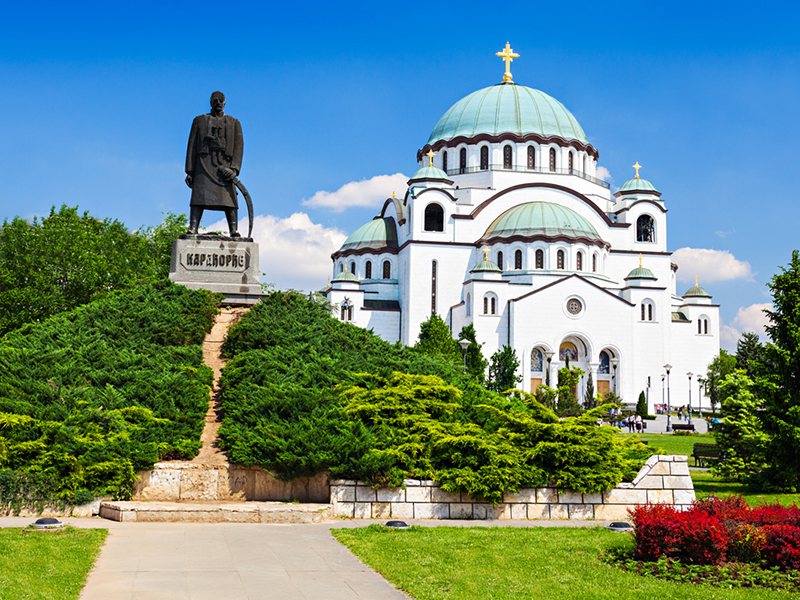 Departure from Sofia to Veliko Turnovo - the Medieval Capital of Bulgaria. En route stop to visit the Troyan Monastery the third largest monastery in Bulgaria . Arrival in the royal town of Veliko Tarnovo. It combines pageantry and picturesque views, with the medieval fortress of Tsarevets; the old Market Place and Samovodska Tcharshia Street among the exciting landmarks to see.

Tour of the museum village of Arbanassi with visit to the Constanceliev`s House and the Holy Nativity Church. Departure for the Valley of Roses. En route: stop to feel the unique atmosphere of the Etara open air museum of authentic traditional crafts, created to preserve the appearance and the spirit of the old time Bulgarian mountain villages and the manufacturing traditions of the region for the future generations. Continue through Shipka mountain pass, which provides some admirable mountain views. Visit to the Memorial Church of Shipka town, erected after Bulgaria's Liberation from Ottoman rule as a gesture of gratitude to both Russian and Bulgarian soldiers that died in the fierce battles there. Visit to the Thracian Tomb (UNESCO) in Kazanlak. Continue to Plovdiv to spend the night.

City tour of the Old Town of Plovdiv - imposing open-air museum situated on the three hills of the ancient Trimontium. the glorious second city of Bulgaria - for a slice of ancient Rome. The city lies on seven hills which are noticeable from quite a distance. The hills, as well as the old town of Plovdiv bring specific color and atmosphere to the town and shape up its unique view and nature. A contemporary of Troy and having survived Mycenae, Plovdiv is a city upon layers of cities and an epoch upon layers of epochs. Plovdiv is all in one: a Thracian and classical Greek polis, the pride of Philip of Macedonia, the capital of Thrace under the Roman Empire, a centre of Byzantinism, a stronghold of the Bulgarians, a dream of the crusaders - a magnificent, wealth and most important city. The most interesting landmark is The Old Town of Plovdiv Architecture Reserve which covers the Three-hill area. It is the original location of the town and almost all of the most interesting history-related sights are within it: cult, residential and public housings, archaeological monuments and museums, narrow cobble-paved streets. Accommodation and overnight in Sofia.

Breakfast. Drive to Belgrade, the third largest city in South-eastern Europe after Istanbul and Athens.

Arrival and accommodation in Belgrade. Afternoon at free.

Possibility for dinner in the bohemian quarter Skadarlija. Paris has Montmartre, Vienna has Grienzig, Athens has Plaka and Belgrade has Skadarlija. The present Skadarlija, originally a narrow, winding alley paved with Turkish cobble-stone, is a remarkable Belgrade tourist attraction that resisted the ravages of time for more than two centuries. Every weekend during summer months this street is turned into a big exhibition space hosting traditional antique exhibition. Groups playing Serbian brass or traditional urban music and actors dressed in traditional Serb costumes perform down the street.

Sightseeing of Belgrade and walking tour in city centar. Belgrade was a target of conquerors for centuries. It was ruined and rebuild almost 40 times. We offer you a unique opportunity to compare variations in culture and architecture in different parts of Belgrade under Austro-Hungarian Empire, with those under the rule of Turkish Ottoman Empire.

Visit of Viminacium - a major city (provincial capital) and military camp of the Roman province of Moesia (today's Serbia), and the capital of Moesia Superior. The site is located 12 km from the modern town of Kostolac in Eastern Serbia. The city dates back to the 1st century AD, and at its peak it is believed to have 40.000 habitants, and was one of the biggest cities of that time. It lies on the Roman road Via Militaris. The archeological site occupies a total of 450 hectares, and contains remains of temples, streets, squares, amphitheaters, palaces, hippodromes and Roman baths. Departure for Oplenac. Visit of royal mausoleum Oplenac and possibility for royal wine tasting /Special local touches/. Topola is a small town with rich history and tells us a tail about royal family Karađorđević, whose history began here, on the hill of Oplenac, above town. Karađorđe’s Town, a spot which once was fortress built by Karađorđe during his reign. Later this fortress was demolished, so today we can see only residence with tower and Church of Holly Mother also known as Karađorđe’s Church. At the top of Oplenac is mausoleum of family Karađorđević, Saint George’s Church. In this church 22 members of royal family were buried. Significant characteristic of this church is a mosaic decoration of interior which consists of 40 million pieces in 15,000 shades. In addition to mausoleum this royal complex includes Peter’s house, Queen’s villa, King’s villa, Winegrower’s house and wine cellar. On the hills of Oplenac, King Peter I planted vineyards on 38 hectares from which they made superb wines well known. The oldest Serbian wine collection can be found in authentic package from 1931 in this particular wine cellar.

Transfer to the Airport for a flight back.