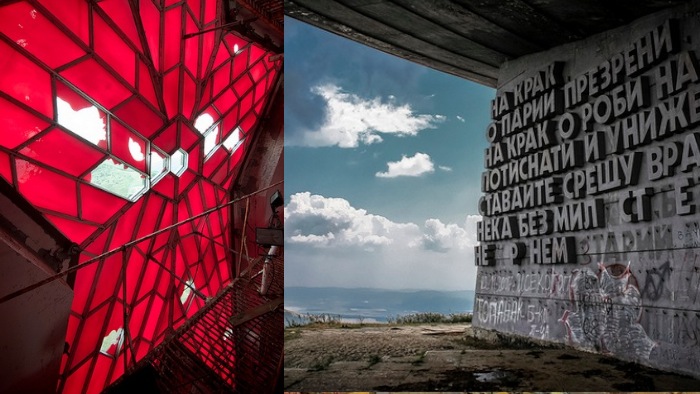 Arrival in Sofia. During the transfer the guide will distribute some red and blue ties, symbol of the fight against the capitalism. In the car will sound popular Bulgarian music from the communist period and famous Russian songs. On the way stop to experience what everyday life and the communist regime were like with a visit of a common Eastern bloc neighborhood of concrete tall buildings – where the "classless" society was sharing the same standards of living. Before go the hotel, stop to visit the Bell Park – a concrete block where between 1979 and 1989, took place the International Assembly of Piece, which slogan was: ¨Unity, Creativity, Beauty¨. Overnight in retro style hotel.

Revisit the era of Communist Bulgaria, as the guide brings the old Sofia back to life. Learn about the Army - a proud pillar of the communist regime - in the National Museum of Military History. Visit the Soviet Army Monument. Learn about the influence and relations with the Soviet Union and the spreading of Soviet Propaganda into every aspect of Bulgarian life. Then, pass by the antique market outside Alexander Nevski Cathedral, with a chance to pick up old communist relics. Pass by the Theatre of the Bulgarian Army and learn of the fate of dissident artists and cultural figures. Continue to the government district. See the Communist party's former headquarter, the Presidency and the old Central Representative Store for the communist elite. Learn about the life of communist leaders and functionaries. Visit the site of a bombing by the communist party in 1925 at St Nedelya church and proceed to the National Palace of Culture. See the largest congress hall on the Balkans, which today still holds the annual congress of the Socialist Party. Visit the newly open Museum of Socialist Art, twenty five years after the fall of Communism in Bulgaria, Sofia finally has its own Memento Park.

In the evening dinner at RAKETA – SOCIALIST- STYLE RESTAURANT

Raketa (Rocket) is a conceptual restaurant where traditions of the communist past are presented in a new light. At the same place 60 years ago for the first time was established this restaurant being the preferred one from the communist leaders. They made all special meeting and events there – both on personal and governmental level. Now it is fully redesigned with revived retro atmosphere. The menu is mainly composed with Bulgarian dishes from the past, a little forgotten, but bringing back the spirit and flavors of the past. Overnight in retro style hotel.

Departure to Pravets, Todor Zhivkov’s birth place (the communist leader in Bulgaria during the period 1954 – 1989). He was loved and hated at once, remembered for his numerous slogans. Visit the Museum of History. The Complex includes an exhibition room with the unique collection of gifts of Todor Zhivkov from worldwide while he was the president of the Republic of Bulgaria. In addition you will see an architectural and ethnographic reproduction of a typical Bulgarian home from the late Revival period (XIX century) in the native house of Todor Zhivkov. The tour will continue to the town of Gorna Oriahovitsa, one of the largest railway hubs in Bulgaria from where we will take a train for a short journey to Veliko Tarnovo- the medieval capital of Bulgaria. Most carriages are still the same from the period of the communism, when main means of transportation was the railway transport. Upon arrival city tour of the old town, visit to the medieval fortress of Tsarevets, the Old Marketplace, Samovodska Tcharshia and some other landmarks.Overnight in retro style hotel.

HIGHLIGHT OF THE DAY- BUZLUDZHA MONUMENT

In the morning we will visit the only private museum of communism in Bulgaria. It is situated in a small village near Veliko Tarnovo and it was founded in 2012. It is private collection of over 1500 exhibits, including photographs, books, newspapers, magazines, slogans, posters, household goods etc. The main purpose of the owner is to preserve a real existed era of Bulgaria history. Departure to Buzludzha Monument. If you come in the end of July or early August you would take part in the National assembly of the Bulgarian Socialist Party. It is still a tradition all partisans to gather the last Saturday of July (most probably this year would be on 01.08.2015) and to listen to the speeches of the present leaders of the party. After the official part there is music, dances and entertainment for the visitors. You would feel the spirit of the socialism idea from first hand. Drive to Kazanlak for overnight.

HIGHLIGHT OF THE DAY- DIMITROVGRAD

Kazanlak is the center of the Valley of the Roses and the home of the Thracian kings. Visit to the Museum of Roses and the ancient Thracian Tomb (Unesco site), dated from 4th century B.C The tour continues to Dimitrovgrad, the town is named after Georgi Dimitrov, the first communist leader of Bulgaria, from 1946 to 1949. The town was built in 1947 by the Communist government of the time and the brigades organized for that purpose. During the walking tour in the centre the guide will tell you more about workers’ life in such towns and the political ideas of Georgi Dimitrov. Departure towards Plovdiv. Upon arrival walking city tour. The most interesting landmark is The Old Town of Plovdiv Architecture Reserve which covers the Three-hill area. It is the original location of the town and almost all of the most interesting history-related sights are within it: cult, residential and public housings, archaeological monuments and museums, narrow cobble-paved streets. In addition you will visit the monument of the soviet Army “Aliosha”. An 11 meter-high granite statue of a Soviet soldier dominates the city skyline. At the bottom of the statue an inscription reads “Glory to the Invincible Soviet Army – liberator”. Overnight in Plovdiv.

HIGHLIGHT OF THE DAY- PERNIK TOWN

Departure towards Pernik- common industrial town. It was the centre of the coal mining and heavy industry in Bulgaria, you will learn about worker’s life and the boom of the industry during the communism. We will visit The Museum of Mining in Pernik. It is not housed in a building, but it is part of an underground gallery. The first dig in the mine, in which the museum is housed, was performed in 1891. It was effective until 1966, when its deposits were exhausted and it was closed, and after about 20 years it was turned into a museum. The Museum of Mining is the only one of its kind on the Balkan Peninsula. Drive to Sofia for your last night in retro style hotel.

Breakfast. Transfer to the airport. End of your post communism experience.