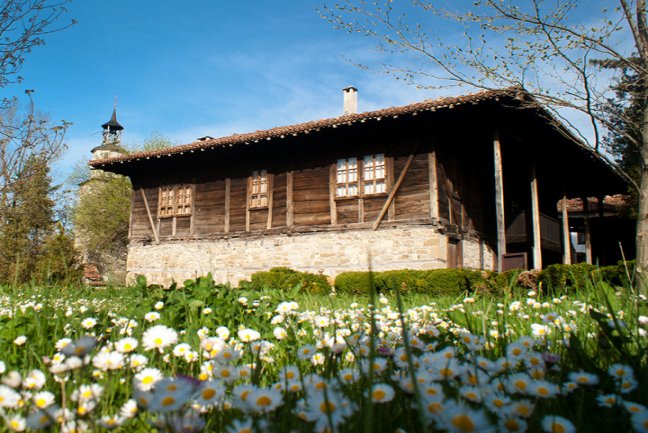 Our trip begins from the capital city Sofia. Our bus will transfer us to the Glozhene Monastry “St. George the Victorious”. Situated on a rocky hill the monastery appears in front of us with its mystic vision from a far distance. Here starts the bike road which will lead us to the the town of Teteven. This calm village nestled in the slopes of the mountain is our place for the first overnight.

Today we are riding in the mountain region of Teteven reaching Beli Osam a small village situated near a river. There is an authentic “washing machine“ for carpets and blankets which works by using only the water power. The accommodation will be in a traditional guesthouse.

By bikes we go to the renaissance town of Troyan – we see traditional Bulgarian handicrafts and national art. Beside with the natural, architectural and historical sightseeing in the town is hidden another important and impressive thing – the local plum brandy. Here we will have the opportunity to visit also the authentic potter workshop and to touch this craft recreated by skillful craftsmen. After that we are visiting the Troyan monastery. The day finishes in another mountain village – Apriltzi.

DAY 4 CYCLING IN THE APRILZI REGION

We ride bikes in the region of the village and we have the opportunity to visit other two monasteries.

The day starts with a transfer to Uzana hut and refreshing riding on the ridge of the Balkans. Climbing the peak Shipka an amazing view appears in front of us. Here we will visit the monument dedicated to the soldiers died in the name of the Bulgarian liberation in the 19th century. From there we continue to the architectural-ethnographical complex Etara where we are going to jump into the Bulgarian handcrafts and livelihood from 17 – 18th century. We finish this day with the transfer to the architectural – historical reserve Bozentsi and overnight in the atmosphere of the traditional Bulgarian renaissance architecture.

Riding bikes from Bozentsi to Tryavna. Sightseeing in Tryavna - one of the most famous cultural and handicraft centers. Attending a demosntartion of traditional renaissance wooden art, typical for the region. We continue exploring the region by bikes and with transfer reach the village Dryanovo where will spend the night.

The day starts with visit of the Dryanovo monastery situated in the picturesque valley of Dryanovska River.
The monastery was founded in the l2th century and is in close proximity to the summer residence of the Bulgarian rulers from the Assen dynasty in the place of Tzurkvishteto. It was one of the big national literature centres, destroyed several times during the Ottoman domination.

Continue with visit of Bacho Kiro Cave - the first electrified cave in Bulgaria. It is a complicated, four storey labyrinth of galleries and branches around 3600 m long. For the visitors an electrified part of about 700 m is provided. The impressive lights offer to visitors the chance to see the strange forms of nature with names given by human imagination: The Rain Hall with the Stone flower, the Willows, the Lake of happiness and other; The Concert Hall is situated 18m above the Entrance; The Jelly-fish, the Bear’s slide, etc. We continue by bikes and transfer to the Veliko Tarnovo, the capital of the Second Bulgarian Kingdom 12-14 century. Overnight.

Cultural walk in the city in the centuries passing the medieval period, the period of the Bulgarian Renaissance till the modern age. We will visit the medieval fortress of the city – Tsarevets Royal Hill, Samovodene renaissance street of the crafts and several churches. In the afternoon visit the picturesque village of Arbanasi – famous for the Nativy Church and its unique frescos. Drive back to Sofia by bus. End of services.

NOTE: DEPENDING ON THE ARRIVAL AND DEPARTURE FLIGHTS, THE PROGRAM WILL BE AMENDED ACCORDINGLY OR ADDITIONAL OVERNIGHTS IN SOFIA CAN BE ADDED.

All Inclusive Series were created in terms of meeting the expectations of our most demanding clients.