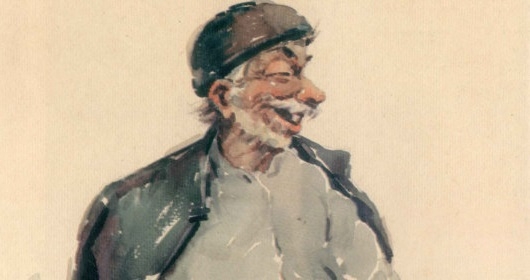 How Did Hitar Peter Get his Name?

Folklore tells the following: as a child Hitar Peter became a servant in the home of a wealthy master. One winter evening guests were to come to the house, and because it was very cold, his master made him go to the front door and open it for them. So Peter stood behind the door and froze as he opened and closed for the guests. It was then that he invented his first trick.

What did Peter do?

He locked the door and opened it only to those who said their name. He left those who did not introduce themselves outside and they returned angry to their own homes. His master was very angry with those he invited and they did not come, and they were angry with him. In order to reconcile, Peter's master invited them to a feast in another house, but Peter also served there.

When they had eaten, Peter’s master gave him food and told him to take it to their house and give it to the one who loved him the most. Peter carried out the order and gave the food to the dog, because he always welcomed his master with joy.

Later, Peter's master returned, but his wife was very angry that there was nothing for her from the delicious food. And asked Peter:

"Peter, who did you give that meal to last night?"

"I gave it to the one who loves you the most," Peter said.

"Who loves me more than my wife?"

"Your dog loves you more!" said Peter. Then he called the dog and told his master to hit him and he hit him. The dog started screaming and ran away.

"Call him now," Peter said. The master called him. It came to him and began to appease him. "Go now and do the same to your wife!" Said Peter.

The master obeyed him, and as a result his wife fled to her father's house. Her husband called her many times to return, but she did not want to hear.

"Well, Peter, you're right that the dog loves me more." But now what to do as my wife does not return?

- Give me five pennies and you will see that your wife will return - even barefoot - to you!

His master gave him five pennies. Peter bought a hen and a pound of butter, walked down the street where his mistress was, and began to shout:

"I'm buying chickens and butter!" Who has for sell, please bring!

The woman, recognizing Peter by his voice, immediately went out on the road and asked him:

"What is this, Peter?" Why are you buying these chickens?

"What will it be?" When you did not come, the master's friends persuaded him to take another woman, more beautiful than you! We're having a wedding tonight, so I'm buying butter and chickens.

Then the woman, not even noticing that she was barefoot, ran home and reconciled with her husband.

And since then they have called Peter Hitar (Sly) Peter.